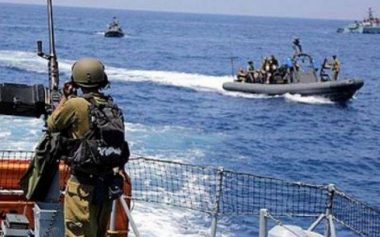 Israeli navy ships attacked, on Monday morning, many Palestinian fishing boats near the shore of Rafah, in the southern part of the besieged Gaza Strip, abducted eleven fishermen and confiscated their boats.

Fishermen who witnessed the Israeli assault said the navy fired dozens of live rounds at the fishing boats, while sailing less than four nautical miles from the Rafah shore.

They added that the navy abducted eleven fishermen after forcing them to undress and swim towards the navy ships, before moving them to Ashdod port, along with three confiscated boats.

On Monday at dawn, the soldiers abducted ten Palestinians during massive and violent searches of homes, in many parts of occupied Jerusalem, and moved them to several detention and interrogation facilities.