Israeli Soldiers Abduct The Imam Of Al-Aqsa Mosque In Jerusalem 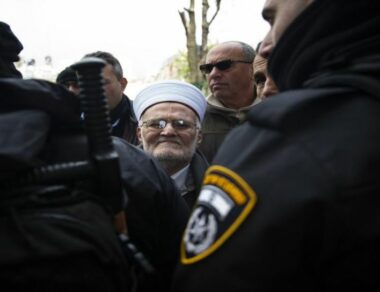 Israeli soldiers abducted, Wednesday, the Imam of the Al-Aqsa Mosque in occupied Jerusalem, after invading his home in the Suwwana neighborhood in the city.

Media sources said many soldiers invaded the home of Sheikh Ekrima Sabri in the Suwwana neighborhood and abducted him. They added that the abduction of Sheikh Sabri came only one day before the al-Isra’ al-Mi’raj Muslim holiday.

It is worth mentioning that Sheikh Sabri has been repeatedly abducted, interrogated, and imprisoned by Israel, in addition to receiving orders denying him access to the holy site for various periods.

In related news, at least 66 Israeli colonists, accompanied by soldiers and police officers, invaded the courtyards of the Al-Aqsa Mosque and conducted provocative tours after the soldiers forced the Muslim worshippers out of the holy site and its surrounding areas.