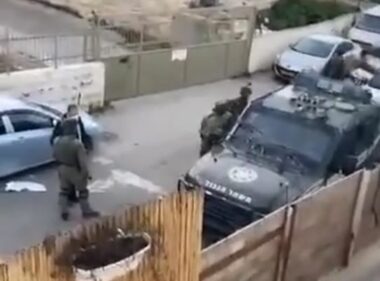 Israeli soldiers abducted, on Wednesday at dawn, seven Palestinians during extensive searches of homes in Bethlehem and Jenin, in the occupied West Bank.

They added that the soldiers also invaded and searched homes in the al-Khader town, west of Bethlehem, before abducting Mohammad Mamdouh Salah.

The soldiers also abducted Malek Allan, 28, from his home in ‘Aida refugee camp, north of Bethlehem.

Furthermore, the soldiers abducted Amir al-Karam from his home in the northern West Bank city of Jenin, after invading his home and searching it.

The Jenin office of the Palestinian Prisoners’ Society (PPS) said the soldiers also abducted Ezzeddin Yousef Freihat, from his home in the al-Yamoun town, west of Jenin, and Mo’tasem Fayez Jaradat, from his home in Sielet al-Harithiya village, northwest of the city.

It is worth mentioning that the soldiers also invaded the Sielet ath-Thaher town, south of Jenin, before violently searching the home of Monir Othman Mousa, along with several homes owned by members of the Sarjoun family.

During the invasion into Sielet ath-Thaher, the soldiers detained Nathmi Othman Mousa, and interrogated him for a few hours before releasing him.

The soldiers also invaded Toura al-Gharbiyya village, southwest of Jenin, and chased many Palestinians in its streets and alleys, in addition to firing live rounds and concussion grenades, before withdrawing without conducting any arrests.

In related news, the soldiers abducted the Imam of the Al-Aqsa Mosque in occupied Jerusalem, Sheikh Ekrima Sabri, after invading his home in the Suwwana neighborhood in the city.