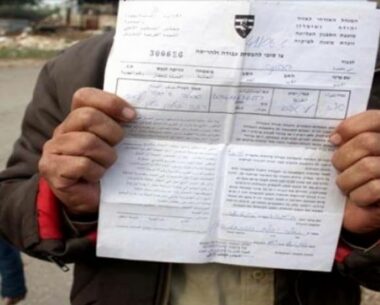 Hasan Breijiyya, the head of the Bethlehem office of the Wall & Colonization Resistance Commission, said the demolition order targets the one-story 200 square/meters under-construction home of Amjad Jihad Ja’abis, allegedly for being built without a permit from the Civil Administration Office, the administrative branch of the illegal Israeli occupation.

The home is near Dar Salah village, and close to Murad Tourist Resort, east of Bethlehem.

Breijiyya added that the home is in Area B of the West Bank, under Palestinian civil control, and added that Ja’abis obtained all needed permits from the Palestinian Ministry of Local Government and is not required to obtain a permit from the Israeli Civil Administration Office.

Starting in the year 2019, the Wadi al-Hummus area started facing serious Israeli violations, which include the demolition of dozens of homes and structures, especially since Israel wants to control more lands for the construction and expansion of its illegal colonies, built in direct violation of International Law, the Fourth Geneva Convention, to which Israel is a signatory and a constant violator, in addition to various United Nations and Security Council resolutions.