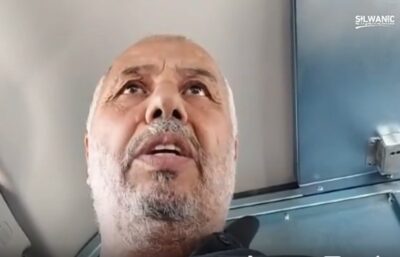 On Sunday, Israeli soldiers abducted nine Palestinians, including a well-known nonviolent activist, a woman, and two siblings, and detained three children, in several parts of the occupied West Bank, including the occupied capital, Jerusalem.

In Hebron, in the southern part of the occupied West Bank, the soldiers abducted a young man, Mo’men Abu Qfeisha, near Beit Einoun town, east of the city.

In a video he published live from the back of an Israeli police car, Abu Al-Hummus said he was documenting an attack by illegal Israeli colonizers before a colonizer assaulted him and tried to break the pole of a Palestinian flag he was carrying, the Wadi Hilweh Information Center In Silwan (Silwanic) reported.

Abu Al-Hummus added that he called the Israeli police before they arrived at the scene and abducted him instead of removing the colonizers who assaulted him.

Also in Jerusalem, the soldiers abducted a Palestinian woman, Abeer Abu Khdeir, a known activist in Shu’fat town, northeast of the city, after storming her home. Abeer is married to a former political prisoner, Nasser Abu Khdeir.

The soldiers also abducted Monther Hamada from his Baher town, southeast of Jerusalem. Monther is the husband of political prisoner Fadwa Hamada.

In Bethlehem, undercover soldiers kidnapped a young man from the Deheishe refugee camp south of the city after ambushing him in a building near the eastern entrance of the refugee camp.

Furthermore, the soldiers abducted Zeid Yousef Daraghma, 23, from Tubas, in the northeastern West Bank, while crossing the Huwwara military roadblock south of the northern West Bank city of Nablus.

Kamal Bani Odah, the head of the Tubas office of the Palestinian Prisoners’ Society (PPS), said Daraghma is a student of Birzeit University near Ramallah.

Furthermore, the soldiers abducted former political prisoner Mohammad Adnan ‘Aabed from Kafr Dan town, west of the northern West Bank city of Jenin, while crossing the Al-Karama border terminals between Jordan and the West Bank on his way back home.