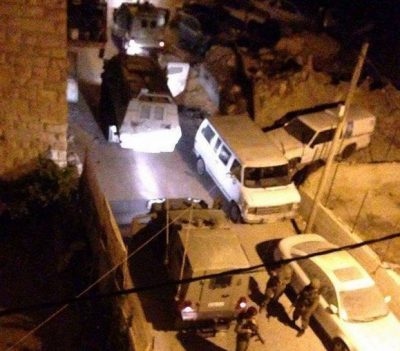 Israeli soldiers abducted, on Sunday at dawn, three Palestinians from their homes in the al-Khader town, south of Bethlehem, in the occupied West Bank.

Ahmad Salah, the coordinator of the Popular Committee against the Annexation Wall and Colonies in al-Khader, said the soldiers stormed and searched homes, and interrogated several Palestinians.

He added that the soldiers abducted a former political prisoner, identified as Ahmad Mohammad Salah, 25, in addition to Mohammad Ibrahim Salah, 17, and Mohammad Mamdouh Salah, 17.

The soldiers cuffed and blindfolded the abducted Palestinians, and took them to Etzion military base and security center, south of Bethlehem.