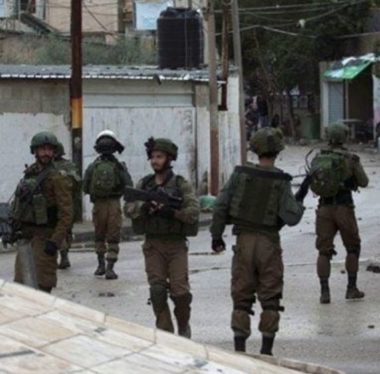 The Palestinian Prisoners’ Society (PPS) has reported that the soldiers abducted Sari Essam Barghouthi, after invading his home and ransacking it, in Kobar village, northwest of Ramallah in central West Bank.

The PPS added that the abducted young man is the nephew of detained Fateh leader and a member of its Executive Committee Marwan Barghouti.

In addition, the soldiers abducted Ahmad Khaled Atiyya, 16, while leaving the local mosque in the al-‘Isawiya town, northeast of occupied East Jerusalem.

Furthermore, the soldiers abducted Jaber Hamad Jaber, 16, near the Ibrahimi Mosque in the southern West Bank city of Hebron, allegedly for “carrying a knife.”

The soldiers also closed the iron gate of the main road near Beit Awwa town, west of Hebron, and prevented the Palestinians from crossing.