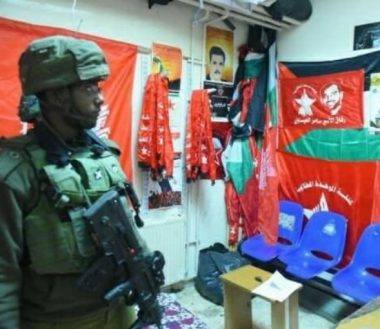 Israeli soldiers abducted, on Thursday at dawn, at least three Palestinians, installed many roadblocks, in addition to invading two print shops, Birzeit University, and the al-Quds University, in the occupied West Bank.

The soldiers also invaded “Infiniti” P in the Salam Street, in Hebron city, and violently searched it, causing damage.

Furthermore, the soldiers installed many roadblocks at main junctions and roads in Hebron city, in addition to several surrounding villages, towns and refugee camps, and increased the military deployment on roadblocks at the main entrance of the al-Fawwar refugee camp, Beit ‘Einun Junction, east of Hebron, and al-Fahs area, south of the city, before stopping and searching dozens of cars, and interrogated many Palestinians while inspecting their ID cards.

The soldiers also invaded homes in ad-Dahra area, in the al-‘Isawiya town, in the center of occupied Jerusalem, and abducted a child, identified as Mahmoud Omran Mustafa, 14.

Another Palestinian, identified as Laith Sami Shehada, was abducted from his home in Abu Dis town, southeast of Jerusalem.

In addition, the soldiers invaded the eastern area of the northern West Bank city of Nablus, and stormed three print shops before violently searching them. The soldiers invaded “al-Manahil Printshop,” owned by Thouqan family, near Balata refugee camp, in addition to “Artistic Touch Printshop,” owned by al-Khatib family in the al-Quds Street in Nablus city, and Hijjawi Printshop in the Industrial Zone, before violently searching them.

In related news, dozens of soldiers invaded Birzeit University, north of Ramallah in central West Bank, and destroyed the door of the Students’ Senate, before confiscating Palestinian flags, and flags for several factions, in addition to many books and stationary.

The soldiers also invaded the Al-Quds University, in Abu Dis town, before storming the Students’ Senate, and confiscated many signs, flags, books and other materials, during violent searches, leading to excessive damage.

The soldiers also abducted Laith Sami Awwad, a student of Al-Quds University, after storming and searching his home in Abu Dis.

Invasions into campuses and educational facilities are direct violations of International Law, but the army conducts frequent invasions into various campuses and schools in occupied Palestine, and fires live rounds, rubber-coated steel bullets, gas bombs and concussion grenades, in addition to abducting many students and staffers.

Earlier this week, the soldiers invaded the campus of Palestine Technical College, in al-’Arroub, north of Hebron, and abducted a student from a Palestinian ambulance.