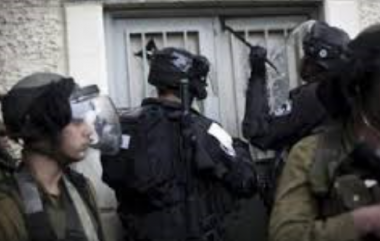 Israeli soldiers invaded, on Thursday at dawn, the al-‘Arroub refugee camp, north of the southern West Bank city of Hebron, searched many homes and abducted three Palestinians. The soldiers also summoned for interrogation three Palestinians from Surif and Kharas nearby towns.

The soldiers caused excessive damage to many of the invaded homes, including the homes of the abducted Palestinians, and interrogated several residents.

Furthermore, the soldiers searched and ransacked many homes in Surif and Kharas towns, west of Hebron, before summoning Husam Abdul-Aziz Haddoush, 34, and Mohammad Jamal Zaya’ra, for interrogation in Etzion military base, north of Hebron.

Ala Rimawi, the head of Al-Quds TV in Hebron, said the attack is part of ongoing violations and intimidation against the journalists and media outlets, and called for international protection to the Palestinian people, especially media agencies.

He said that Israeli soldiers have carried out at least 20 violations against media agencies and offices, in Hebron, in the last 18 months, in addition to shutting down many TV stations and media outlets.