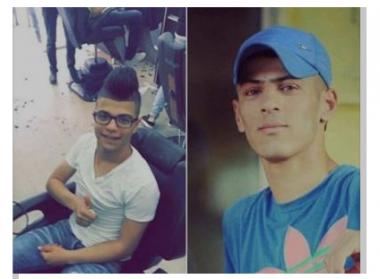 In new crime of excessive use of force, Israeli forces killed two Palestinian civilians and wounded a third one in Jenin refugee camp in the northern West Bank.

According to PCHR’s investigations and eyewitnesses’ testimonies, at approximately 02:00 on Wednesday, 12 July 2017, Israeli forces backed by military vehicles and dozens of infantry soldiers moved into Jenin refugee camp in the northern West Bank.

They stationed in the center of the camp and then stepped out of their vehicles.  They surrounded several houses to raid them and arrest some of its residents.

Meanwhile, dozens of Palestinian young men and children gathered and threw stones at the soldiers, who heavily opened fire at the stone-throwers.

As a result, a child and young man were killed while another young man was only wounded after being hit with a bullet to the leg.  The latter was identified as ‘Oday Nizar Abu Na’asah (19) while the two killed were identified as follows:

The Israeli forces claimed that the soldiers opened fire at “two attackers” after “Palestinian armed persons opened fire at them and threw explosive devices at the forces stationed in the camp.

However, eyewitnesses said that the Israeli soldiers stationed near the camp buildings opened fire at a motorbike driving to the western side of the camp and traveled by the two killed persons, who were not involved in the clashes which broke out between the Palestinian civilians and Israeli soldiers.

In light of the above, PCHR condemns this new crime committed by the Israeli forces resulting in the death of Salah and Salamah.  Thus, PCHR: