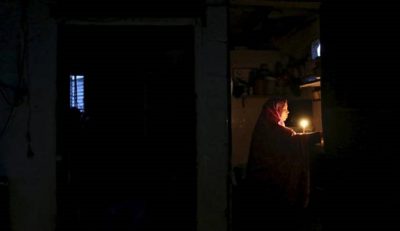 The Palestinian Center for Human Rights (PCHR) is strongly concerned over an unprecedented deterioration of the electricity crisis in the Gaza Strip and warns of the disastrous consequences of the already deteriorating humanitarian situation.

PCHR highlights that the power outage has reached over 20 hours a day for over 3 months, due to which the people’s houses and workplaces were turned into hell especially under the very high temperature and humidity.

The electricity crisis has resulted in accelerated aggravation of all basic services, mainly the health services and environmental health services, including the water and sewage network. Therefore, the industrial and commercial facilities faced unprecedented and additional problems to those they already have had.

The Israeli authorities positively responded and decreased the power supply at a rate of 41.6%, resulting in decreasing the electricity supply provided by Israel from 120 to 70 MW.

This coincided with the electricity company’s disruption because of the lack of fuel needed for its operation, in addition to Ramallah government’s insistence to impose taxes on fuel. All of this coincided with the damage of the Egyptian power lines which supply the Gaza Strip with about 35 MW.

In an attempt to ease the aggravating electricity crisis, on 21 June 2017, the Egyptian fuel started to enter via Rafah International Crossing Point for the operation of the power plant following an agreement reached previously in Cairo. According to the agreement, the Energy Authority in Gaza purchases the fuel needed directly from Egypt.

Therefore, the power plant’s three generators were operated producing 70 MW. In a serious development on 08 July 2017, the Energy Authority in Gaza declared that two generators stopped and the power production declined to 20 MW because the entry of the Egyptian fuel stopped.

As a result, no Egyptian fuel was allowed to enter the Gaza Strip. In the meantime, the Israeli side continued to minimize the power supply and the Egyptian power lines remained damaged. This caused an unprecedented aggravation, during which the electricity is on for only 2-4 hours a day without any declared and certain schedule.

According to the Gaza Electricity Distribution Company (GEDCo), the Gaza Strip needs of electricity are estimated now at 500 MW, only 90 MW of which are available (18%) resulting in a shortage of 410 MW (82%). GEDCo pointed out that the electricity available is provided by the Israeli lines (70 MW) and the power plant with one generator (20 MW). However, the Egyptian lines are still damaged.

In view of the ongoing electricity crisis, it became clear that the Palestinian parties to the political conflict have given up on the civilians’ basic rights for political gains.

It is obvious that the unfair measures taken by the PA to hinder any solutions of the electricity crisis aim at suffocating the Gaza Strip population.

This was ostensibly declared by Dr. Mohammed Eshtaya, Member of Fatah Central Committee. He said in the “Political Status” TV show on Palestine satellite channel on 09 July 2017, “There are indications that the PA measures would blow up the situation in Gaza. Therefore, Egypt tries to ease the situation. The point is that we have two demands: first, the measures should not be eased from one side; second, whatsoever measure taken by Egypt should be done in coordination with the Palestinian leadership”.

The power outage for most hours of the day resulted in very serious repercussions on the life of residents and directly threatened all basic services in addition to incurring the Gaza Strip economy heavy losses, particularly the commercial and industrial facilities and poultry breeders.

The Ministry of Health in Gaza was forced to minimize its diagnostic and support services due to the deterioration of the power outage crisis and severe shortage of fuel needed to operate the hospitals’ generators.

The Ministry’s Spokesperson, Dr. Ashraf al-Qedrah, said that the fuel allocated for operating the generators of the hospitals and medical centers in the Gaza Strip is nearly running out.

He added that this would negatively affect the health conditions, warning that 40 operating rooms, 11 gynecology and obstetrics operating room, 50 medical laboratories and 10 blood banks will be closed.

He also warned of the repercussions of the crisis on the health status of patients in the Intensive Care Units (ICUs), incubators and Dialysis Departments.

He pointed out the crisis affects the medicine safety, laboratory materials, vaccinations stored in refrigerators, in addition to their impact on the emergency departments in hospitals and depriving patients of safe health services.

Furthermore, the electricity crisis has also negatively impacted offering the minimum water and sanitation services to the civilians residing the Gaza Strip.

It has also created major crises, including the disruption of potable water for long time exceeding 4 days in many areas and treatment of sewage, which is being pumped into the sea without being treated.

Director-general of the Environment Protection Department in Gaza, Bahaa al-Din al-Agha, said that 50% of Gaza Sea shores are contaminated due to pumping untreated wastewater into the sea because of the long power outages.

He warned that the contamination rate of the shore will amount to 70% in light of the aggravating power crisis, making the sea inconvenient for swimming and exposing the residents to many diseases.  Al-Agha empathized that pumping the untreated sewage drainage affected the main aquifer, which is the only source of water for Gaza residents.

The power outage for long hours also disrupted the work in the economic facilities, whose production depend on the electricity and increased the economic deterioration, which the Gaza Strip has already suffered from.

As a result, dozens of factories were forced to shut down such as the Ice cream and juice factories.  Moreover, the power outage negatively affected the work of poultry breeding, including the poultry productivity and breeding process, grain and feed mills and diary factories.

PCHR stresses that the Gaza Strip is still an occupied territory and the Israeli authorities has hereby obligations towards it.  Thus, PCHR calls upon the Israeli authorities, in its capacity as an occupying power according to the international humanitarian law, to fulfill its legal obligations towards the Gaza Strip civilians and to guarantee civilians’ access tp the basic services, including fuel supplies needed for operating the Gaza power plant.

PCHR also calls upon the parties administrating the electricity crisis to keep the people of the Gaza Strip away from the political conflict and not to give up on their rights for political interests of any party.

Furthermore, PCHR calls upon the parties administrating the electricity sector in Gaza and Ramallah to solve immediately this crisis to spare the Gaza Strip more deterioration.

PCHR also warns of the serious consequences of the crisis, which affects all the vital sectors, including the basic services, which 2 million Palestinians living in the Gaza Strip need, such as water supplies, breakdown of healthcare facilities, including hospitals, medical centers, failure of the sewage plants and education sector.