Gaza is Headed for a Deeper Political and Humanitarian Crisis 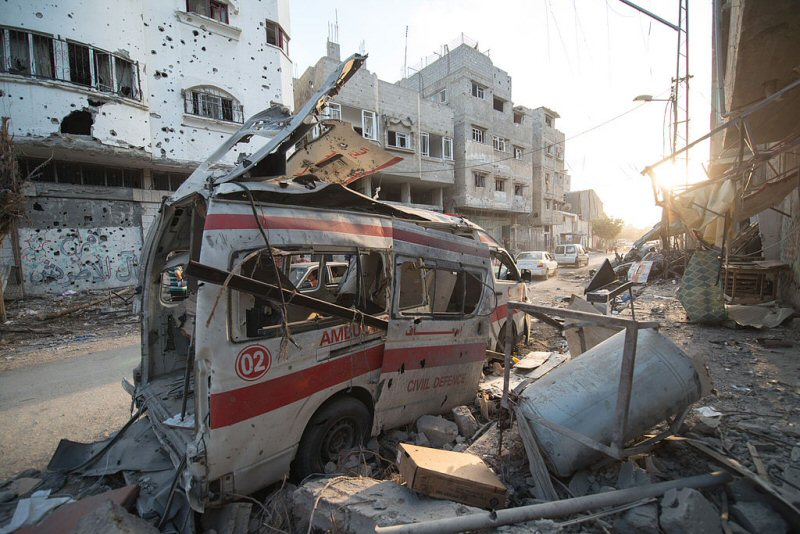 Political players both in the Occupied Palestinian Territory (OPT) and the region are repositioning themselves after the recent emergence of a coalition between Hamas and Mohammed Dahlan, the former leader of Fatah in Gaza and Hamas’s long-standing enemy, as well as the sanctions placed on Qatar by Saudi Arabia, the United Arab Emirates, Bahrain, and Egypt. The Palestinians of Gaza are anxiously waiting to see how these significant political changes for the Gaza Strip will affect their daily lives.

Gazans fear worse conditions, and rightly so. The Strip’s likely loss of Qatar as a funder and ally, as well as the all-but-guaranteed continuation of collective punishment measures inflicted on Gaza by the Palestinian Authority (PA), signal even more miserable living conditions. This may be hard to imagine after ten years of a brutal Israeli blockade, interspersed with assaults that have left thousands of civilians killed or wounded and infrastructure devastated, but the recent electricity crisis has shown how conditions can go from worse to even worse: As we went to publication, Gaza was totally without power. Beyond the human suffering, this situation exacerbates political fragmentation and undoubtedly weakens the Palestinian quest for self-determination and freedom.

In the two reflections below, Al-Shabaka Policy Analysts Haidar Eid and Ayah Abubasheer, both based in Gaza, examine the political ramifications of the Qatar crisis on Gaza, particularly Hamas’s desperate attempts to retain its rule and authority in the Strip using its newfound rapprochement with Dahlan. They also recount how everyday lives are being affected.  Their conclusion? Gaza’s future has perhaps never looked bleaker.

There is near consensus in the Gaza Strip that the enclave is experiencing the beginning of an era marked by unprecedented punitive measures imposed by the Fatah-backed PA. This period began in March, when Hamas formed an administrative committee to govern Gaza. Threatened by the move, the PA retaliated by suspending or reducing Gaza-based government employees’ salaries; withholding allocations of power, medicine, and health care; shelving freed prisoners’ pensions; and denying Gaza patients’ referrals for treatment in West Bank and Israeli hospitals. Last week, the PA forced more than 6,000 Gaza civil servants, most of whom were working in the education and health sectors, into early retirement.

In response, Hamas turned to Egypt and its arch-rival Mohammad Dahlan, though not before attempting to lobby the US administration for a role in the “peace process” by adopting the two-state solution through changes to its charter. The US snub made it possible for Hamas to ally with a regime that has waged a violent campaign against its mother movement, the Muslim Brotherhood. Yet the Hamas-Egypt partnership is not altogether surprising, as it comes amid Hamas’s freeze on resistance for the sake of maintaining authority.

It is impossible to understand these developments without considering those taking place elsewhere in the Arab world, particularly in the Gulf. The recent crisis between Qatar and some of the other members of the Gulf Cooperation Council (GCC) has affected Gaza and, by extension, the Palestinian cause, by placing it even lower on international and Arab leaders’ list of priorities. In addition, Qatar provides humanitarian aid to Palestine. Though it does not take a clear-cut political stance – and thus fails to challenge Israel’s policies of occupation, apartheid, and settler colonialism – the potential loss of Qatar as an ally puts Hamas in a more vulnerable position. These developments also come amid the US administration’s drive to consolidate Arab normalization with Israel without achieving the minimum basic rights for the Palestinian people guaranteed under international law.

Hamas is thus at the mercy of Israel, the US, and the PA, and is desperately trying to maintain its grasp on power in the Gaza Strip. This appears to be driving Hamas to institute more policies that may help it in the short term, but in the long run will serve to maintain a punishing status quo that will also ultimately weaken it. Oraib Rantawi, for instance, argues that Hamas is contemplating joining a new camp close to the Arab Quartet (Egypt, Jordan, Saudi Arabia, and the United Arab Emirates), and that Mohammad Dahlan is its escort on this path.

Considering the PA’s intransigence and the measures it is taking regarding Gaza, as well as the leaked document that outlines the “national accord for building confidence” between Hamas and Dahlan, the remaining option available to Hamas does appear to be to open up to Egypt and its allies. Yet given the fact that Dahlan is persona non grata in the PA due to conflicts within Fatah, the PA’s pressure on Gaza is expected to increase.

The competition between the PA and Hamas to consolidate relations with US-backed Arab camps will be fierce, and it will happen under the slogan of “preserving the national project” and “protecting the resistance.” However, both movements lack a clear strategy to address the larger, urgent issues, such as Israel’s rampant settler colonization and ethnic cleansing of Jerusalem and the enactment of racist laws against the 1948 Palestinians – the constituent missing from the discourse of both ruling factions.

In the short term, all other political forces, especially those with influence in the policymaking of the Palestine Liberation Organization (PLO), such as the Popular Front for the Liberation of Palestine (PFLP) and the Democratic Front for the Liberation of Palestine (DFLP), must put pressure on Fatah to retract all punitive measures inflicted on the Gaza Strip. In the longer term, an approach  is needed that highlights the illegality of the Gaza blockade as a form of collective punishment. This approach must hold Israel to account, but also hold the Palestinian leadership responsible. Ultimately, Gaza must be contextualized within the larger Palestinian question: Its 1.5 million refugees’ right of return and right to self-determination are sanctioned by international law, and must be achieved through its implementation.

Qatar has been a major donor to the Gaza Strip since Hamas won the 2006 elections. It has particularly responded to the large-scale destruction that Israel has inflicted on Gaza via its numerous offensives. In 2012, Qatar established its Gaza Reconstruction Committee, and has carried out major projects including paving main roads, establishing agriculture initiatives, and building the Sheikh Hamad bin Khalifa Al Thani City, a residential area of more than 3,000 housing units for Palestinian families who lost their homes in Israel’s 2014 attack.

These projects have employed a significant number of Gazans, a welcome, if drop-in-the-bucket, salve to unemployment in the Strip, which hovers around 42 percent for adults and 60 percent for those between 15 and 29. Qatari aid has thus had a positive effect on Gaza’s population, who live in dire conditions under Israel’s illegal blockade.

Yet, several weeks ago, Qatar’s special envoy to Gaza, Muhammad al-Amadi, declared that the “Gaza Strip is going toward the worst.” Gazans were shocked by the comment, as it signaled even further deterioration in their daily lives. Accompanying Al-Amadi’s comments were media leaks that Qatar had asked Hamas officials based in Doha to leave the country. Soon after, the  Qatar crisis erupted, Saudi Arabia and the UAE, Israel’s Arab Gulf partners, as well as Bahrain and Egypt, demanded that Qatar enact a range of changes or suffer a trade and diplomatic blockade. One of those demands was that Qatar cease its support of Hamas.

The people of Gaza continue to pay a heavy price for such political maneuverings. And if it wasn’t enough to contend with Israeli-induced violence and deprivation as well as the likely loss of support from Qatar, the Palestinian Authority (PA) and its leader, Mahmoud Abbas, are also inflicting collective punishment on Gaza.

Though the Strip uses four different sources of energy, it receives a mere 30 percent of its energy needs. On June 12, Israeli Prime Minister Benjamin Netanyahu’s government cut electricity supplies even further, leaving two million people with only four daily hours of power. On June 20, Israel responded to Abbas’s request that power be cut even further, and slashed electricity to only two hours daily. With such punitive measures from the PA, along with its recent cut of Gaza employees’ salaries by between 30 and 70 percent, Abbas is hoping that the Strip’s bone-tired population will revolt against Hamas.

This outcome does not appear likely. Many young men are joining Hamas’s military wing, the Al-Qassem Brigades, though not because of political or ideological beliefs, but because they are desperate to secure a livelihood. This has coincided with mosques’ efforts to mobilize Gazans toward a reemphasis on conservative Islamic doctrines and pious living. For instance, Hamas has made it clear that a woman should not accompany a male friend in public without being accompanied by a male relative. At the same time, prostitution is on the rise, also due to desperation for resources, creating serious social consequences for women and their families.

Suicide rates and drug use have also increased. Domestic disputes, whether taken to official courts or informal justice systems (mukhtars), are in the hundreds. According to the Supreme Sharia Judicial Council in Gaza, the divorce rate, once just two percent, is now nearly 40 percent. In an ironic parallel, Gaza dating sites are matching widows to men seeking second or third wives. Moreover, and against the Palestinian child law, children are begging in Gaza’s streets.

It is crucial to differentiate between these people who are suffering – the people of Gaza – and Hamas, as well as between the Palestinian cause and its illegitimate political leaders, when considering what role a regional or international player could have in changing Gaza’s reality by challenging Israel’s illegal policies. Unfortunately, history as well as the present show that the occupation and human rights do not headline the agenda of political players, especially Israel. Indeed, former Israeli Prime Minister Ehud Barak recently remarked that Israelis do “not feel apologetic about [the current reality of the occupation].” With Qatari support potentially cut off, Gazans are not even able to count on resources from one of their few supporters.

Yet even if Gaza continues to receive aid, whether from Qatar, Turkey, the UAE, or even Iran, and Egypt opens the Rafah crossing more regularly in exchange for Hamas’s guarantee of Gaza non-involvement with armed militant groups in the Sinai, support will still be conditional and restricted. This dubious aid is what we in Gaza are forced to anticipate as a substitute to our brutal reality.