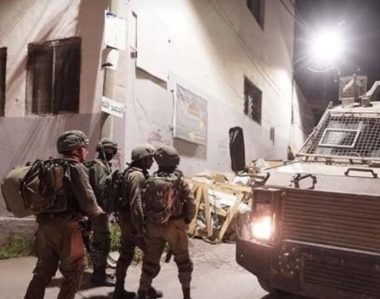 Israeli soldiers abducted, on Wednesday at dawn, at least fourteen Palestinians from their homes, after invading and violently searching them, in several parts of the occupied West Bank. The soldiers also caused fire in olive orchards and wheat fields. The soldiers also fired many gas bombs and concussion grenades while withdrawing from Azzoun, causing fires in wheat fields and olive orchards.

In occupied Jerusalem, the soldiers also searched and ransacked homes and abducted seven Palestinians, including a child.

« Soldiers Prevent A Palestinian From Building A Wall Around His Land In Bethlehem Soldiers Steal 20.000 Shekels From Two Homes In Hebron »