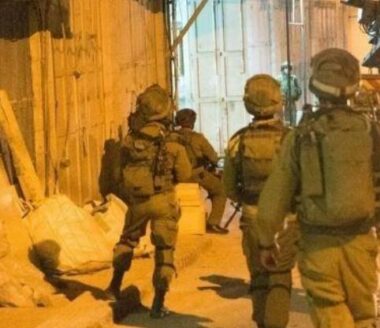 On Tuesday dawn, Israeli soldiers stormed and ransacked dozens of homes across the occupied West Bank and abducted twenty-four Palestinians, including fourteen in the Ramallah governorate.

In the central West Bank governorate of Ramallah, the soldiers abducted fourteen young men from the governorate, including thirteen from Silwad town, east of the city.

In Beitin village, northeast of Ramallah, the soldiers abducted a young man, Amin Bassam Jarab’a, from his home.

In Nablus, in the northern west Bank, the soldiers invaded and ransacked many homes and abducted Jihad Ahmad Shaqqu, Ibrahim Mousa Kharraz, Amir Al-Azizi, and former political prisoner Abdul-Rahman Bishkar who was imprisoned by Israel for twenty years, from several neighborhoods in the city.

It is worth mentioning that Amir is the brother of Mohammad al-Azizi, 22, who Israeli soldiers killed in the al-Yasmina neighborhood in Nablus’s Old City, on July 24, 2022, along with Abboud Sobeh, 29, and injured nineteen Palestinians.

In the Ath-Thaheriyya town, south of Hebron in the southern part of the West Bank, the soldiers abducted Emad Al-Ghamari and former political prisoner Nabil Al-Qaisiyya.

In related news, a colonialist bus sustained damage after a protester hurled a Molotov cocktail at it near Beit Ummar town, north of Hebron.