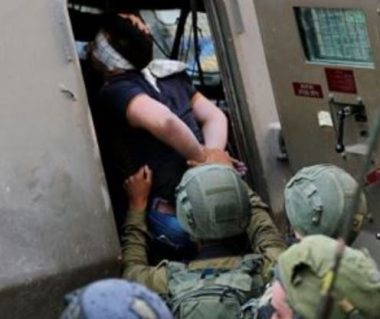 The Palestinian Prisoners‚Äô Society (PPS) has reported that Israeli soldiers abducted, late at night and on Thursday at dawn, twenty Palestinians during extensive invasions and violent searches of homes, in several parts of the occupied West Bank.

In Bethlehem, the soldiers abducted Wajeeh Zoheir Awwad, 25, from his home in the al-Jabal area, and abducted another Palestinian in addition to assaulting a third, in the al-Khader town, south of the city.

The soldiers also assaulted and injured Zobeidi’s brothers, identified as Antwan and Mohammad.

In Salfit, in central West Bank, the soldiers abducted Khaled Mohammad Hakim, his from Tha‚Äôer, in addition to Attaf Sa‚Äôid al-Qadi and Yousef Mohammad al-Qaisi, from Deir Istiya town.

In occupied Jerusalem, the soldiers abducted Wisam Ahmad al-Mekhel, and his brother Mohammad, from al-Ezariyya town, southeast of the city.

In Silwan town, south of the Al-Aqsa Mosque in Jerusalem, the soldiers abducted Luay Sami Rajabi in Batn al-Hawa neighborhood.

It is worth mentioning that the soldiers abducted, on Wednesday evening, four children, ages 13-15, from Shu‚Äôfat refugee camp, in the center of Jerusalem.

Also on Wednesday evening, the soldiers released a young man, identified as Monther Jamjoum, from Silwan town, on a 5000 Shekels bail, and ordered him under house arrests for five days.

The young man was also ordered not to see, or communicate in any way, with his friends for thirty days.

He was taken prisoner, on Wednesday evening, after the soldiers alleged he ‚Äúattacked settlers‚ÄĚ in Bab al-‚ÄėAmoud area.

« Israeli Soldiers Abduct One Palestinian In Bethlehem Abbas to UN Security Council: ‚ÄúIsrael is acting as a state above the law‚ÄĚ »