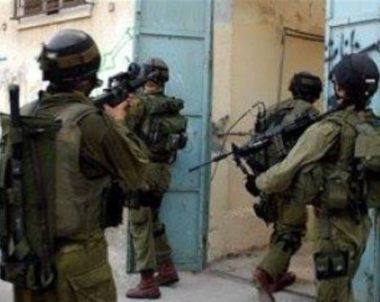 Israeli soldiers abducted, overnight and on Tuesday, at least twenty-two Palestinians in several parts of the occupied West Bank, including East Jerusalem, the Palestinian Prisoners’ Society (PPS) has confirmed.

The PPS stated that the soldiers invaded and ransacked dozens of homes across the West Bank and interrogated many Palestinians while inspecting their ID cards.

In occupied Jerusalem, the soldiers abducted Zeid Nabil Masalma, 21, the son of Nabil Masalma, who is serving a 32-year prison term, Moath Yousef Tbeish, in addition to Mahmoud Khaled Damdoum, 25, and Ahmad Jawad Othman, 14, from the al-‘Ezariyya town, near Jerusalem.

Also in Jerusalem, the soldiers abducted Sheikh Ra’ed Da’na of the Al-Aqsa Mosque, while walking near his home.

It is worth mentioning that, two days ago, the army handed Sheikh Da’na, a warrant preventing him from entering Al-Aqsa Mosque for six months.