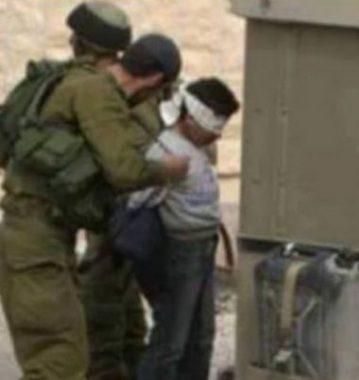 Israeli soldiers abducted, on Sunday evening, two Palestinian children, and a young man, in two separate incidents in Hebron city, in the southern part of the occupied West Bank.

Media sources in Hebron said the soldiers abducted the two children, who remained unidentified at the time of this report, in the al-Hareeqa area, near the illegal Keryat Arba’ Israeli colony.

The Israeli army claimed that the two children burnt a fire near the fence of the illegal colony.

In addition, the soldiers stationed at Abu ar-Reesh military roadblock, near the Ibrahimi Mosque in Hebron city, abducted a young man while walking back to his home, after they forced him to undress while searching him, and insisted that he removes all of his clothes.

The Palestinian, known to the soldiers who are permanently deployed in the area, refused to be mistreated this way, and the soldiers decided to detain him.