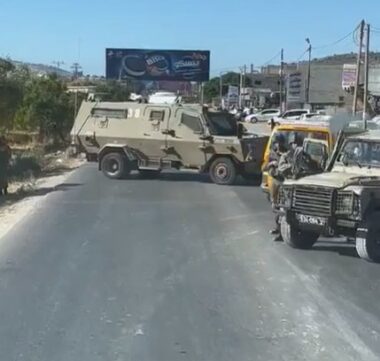 On Friday evening, Israeli soldiers abducted two young Palestinian men from the Jenin refugee camp, in the northern West Bank, after stopping them at the Al-Hamra military roadblock, in the Northern Plains of the occupied territory.

Media sources said the soldiers stopped and searched dozens of Palestinian cars and interrogated many residents while inspecting their ID cards.

They added that the soldiers abducted Osama Nibali and Hamd Ghrayyeb and detained Ahmad Ar-Raed for several hours before releasing him.

In related news, the soldiers invaded Rommana, Zabbouba, Anin, and Toura near Jenin and conducted massive searches in the area.