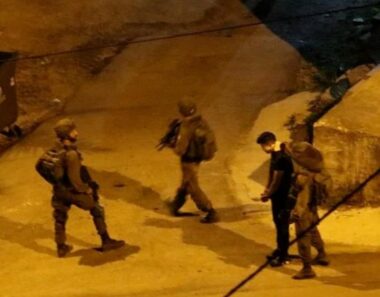 Israeli soldiers abducted, on Sunday at dawn, two Palestinians from Bethlehem governorate, south of the occupied Palestinian capital, Jerusalem, in the West Bank.

The soldiers also abducted Anas Ismael Nawawra, 31, after stopping him at the “Container” military roadblock, northeast of Bethlehem.

Nawawra is from the Hindaza area, east of Bethlehem; the soldiers detained him at the roadblock for a few hours, before moving him to an unknown destination.

In related news, the soldiers abducted two Palestinians at a military roadblock near Jenin, in the northern part of the occupied West Bank.