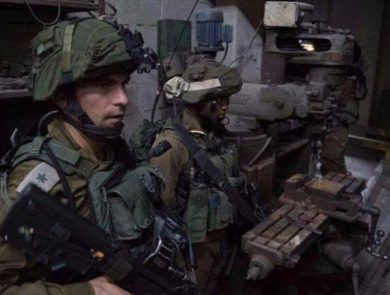 Israeli soldiers invaded, on Monday at dawn, several Palestinian homes, in the southern West Bank city of Hebron, violently searched them and abducted two Palestinians, in addition to confiscating machines from a lathe workshop.

The WAFA Palestinian News Agency has reported that the soldiers abducted Rafat Maher Sharabati, from his home, and invaded his father’s lathe workshop, before confiscating machines and equipment.

The soldiers also abducted another Palestinian, identified as Mos’ab Abu Turki, after invading and ransacking his home, in the city.

Furthermore, the soldiers installed many roadblocks at the main roads leading to Sa’ir and Halhoul towns, in addition to Hebron’s northern road, before stopping and searching dozens of cars, and interrogated many residents while inspecting their ID cards.