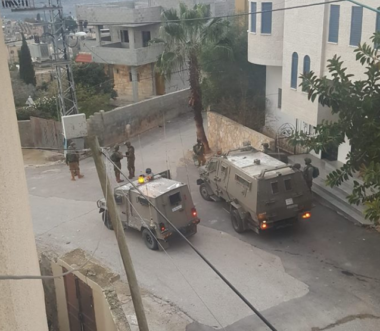 Israeli soldiers invaded, Wednesday, Kufur Qaddoum town, east of the northern West Bank city of Qalqilia, and abducted two Palestinians, including a wounded man, and attacked the father and the uncle of the injured Palestinian.

Morad Eshteiwi, the media coordinator of the Popular Committee against the Annexation Wall and Colonies in Kufur Qaddoum, said the soldiers abducted Yazan Barham, 20, who was previously shot and in injured by the soldiers, and Dia’ Rajab, 29.

Eshteiwi added that the soldiers assaulted and injured Yazan’s father, and his under Sobhi, 55, causing various cuts and bruises, before Palestinian medics rushed them to a hospital.

Eshteiwi called on international legal and human rights organizations to intervene and stop the escalating Israeli violations, and added that Yazan has several bullets’ fragments in his back and requires surgery.

It is worth mentioning that the soldiers also invaded and ransacked several homes, while undercover forces infiltrated into the town using a car with Palestinian license plates, but the locals managed to notice them fast.