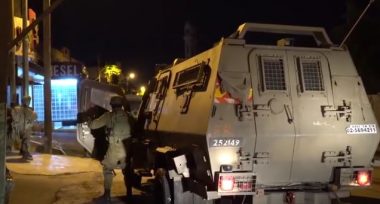 On Monday, Israeli soldiers opened fire at two Palestinians before abducting them in the Jabal At-Tawil area in the Al-Biereh city, in the central West Bank governorate of Ramallah and Al-Biereh.

Media sources said the soldiers ambushed several young men in the Jabal At-Tawil area and fired many live rounds at the.

They added that the soldiers took the two young men to the nearby Psegot illegal colony, built on stolen Palestinian lands in Al-Biereh.

On Monday morning, Israeli soldiers attacked several Palestinian women near the Chain Gates in Jerusalem’s Old City and abducted one while heading to the Al-Aqsa Mosque after the army closed the holy site to allow groups of illegal Israeli colonizers to tour the holy compound.

The soldiers also abducted three Palestinians in Husan town, west of Bethlehem, south of occupied Jerusalem in the West Bank.