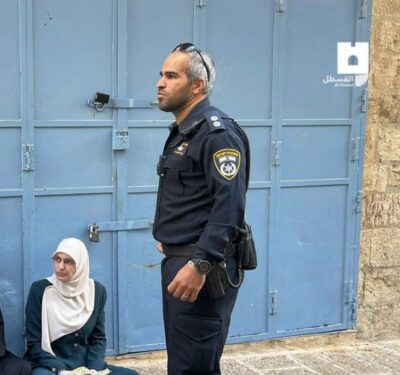 On Monday morning, Israeli soldiers attacked several Palestinian women near the Chain Gates in Jerusalem’s Old City and abducted one while heading to the Al-Aqsa Mosque after the army closed the holy site to allow groups of illegal Israeli colonizers to tour the holy compound.

The Al-Qastal News said the women were not allowed to cross and were forced to leave the area after being prevented from entering Al-Aqsa.

Al-Qastal added that the soldiers attacked several women and hurled insults while pushing them and forcing them to leave, and injured Hanadi Halwani before abducting her.

One of the women, Nafisa Khweiss, said the soldiers did not just attack women but also proceeded to assault every Palestinian, including young men, children, and even journalists, before forcing them out of the holy compound through the various nearby gates.

Khweiss added that the soldiers threw copies of the Holy Quran on the ground while attacking some worshipers and abducted several Palestinians.