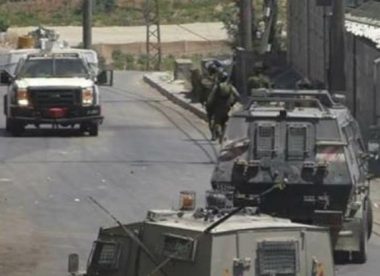 Israeli soldiers abducted, on Thursday at night, two young Palestinian men near Jenin and Nablus, in the northern parts of the occupied West Bank.

The soldiers invaded Zabbouba village, west of Jenin, and attacked protesters with gas bombs and concussion grenades, causing many to suffer the effects of teargas inhalation, especially when the army targeted a number of homes.

The soldiers also searched homes, and abducted Rabea’ Zohri Jabarin, from Tayba nearby village, while visiting his brother to celebrate the Al-Adha Muslim feast.

In addition, the soldiers invaded Sebastia town, north of Nablus, and abducted a young man, identified as Ibrahim Sha’er, in the archeological area.

Mohammad Azem, the head of the Local Council in Sebastia, said many soldiers and colonialist settlers invaded the area, and assaulted several Palestinians.

In related news, a young man from Aseera al-Qibliyya village, south of Nablus, was in injured in his head after colonialist settlers assaulted him, and was moved to Rafidia hospital.