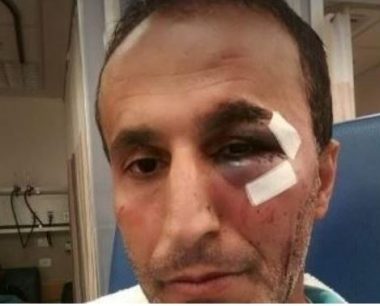 Israeli soldiers attacked and injured, Thursday, a Palestinian man after cuffing and detaining him near the Al-Aqsa Mosque, in occupied East Jerusalem.

The Palestinian Nitham Abu Ramouz, 37, was detained by the soldiers near the Gate of the Tribes as he was heading to the Al-Aqsa Mosque.

He was cuffed and blindfolded before the soldiers assaulted him, especially on his face and head, while moving him al-Qashla nearby detention and interrogation center.

The assault left the Palestinian bleeding from the face and head, and the Police later decided to move him to Hadassah hospital, after he suffered cuts and bruises, especially around his left eye, and received eight stitches.

Hours later, Abu Ramouz was released after being ordered to return, Friday, for interrogation.