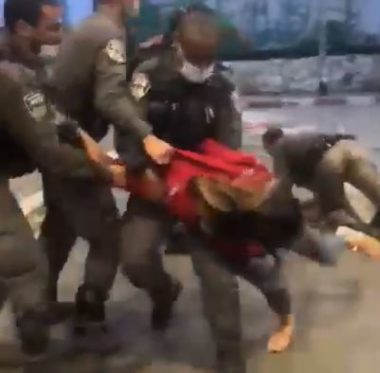 Israeli soldiers assaulted, on Wednesday evening, a young Palestinian woman, and her brothers, in the al-‘Isawiya town in occupied East Jerusalem, before abducting them.

The incident took place while the two were in a gas station at the entrance of the town, after they headed there to buy something from the convenience store.

Eyewitnesses said the soldiers first stopped the young man, Ali Mheisin, and started assaulting him, before his sister, Aya, tried to intervene.

They added that the soldiers constantly assaulted the young woman and her brother, and were dragging them on the ground, causing various cuts and bruises, before forcing them to sit on the floor of their military vehicle.

The reason for abducting the two siblings remains unknown, and they were both taken to the Police Station in Salahuddin Street, in Jerusalem.