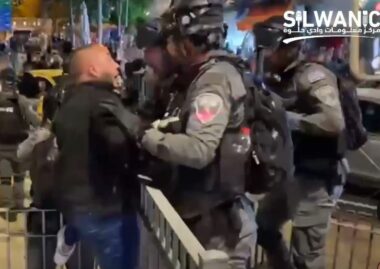 Israeli soldiers attacked, on Friday night after midnight, dozens of Palestinians with clubs and batons, and fired gas bombs and concussion grenades, in addition to abducting four young men in Bab al-‘Amoud and surrounding areas in the occupied Palestinian capital, Jerusalem.

Eyewitnesses said dozens of Palestinians were sitting and walking in Bab al-Amoud, and several surrounding areas, before the soldiers started chasing them to force them away.

They added that the soldiers, and mounted police officers, chased the young men to Sultan Suleiman Street, Bab as-Sahera, Nablus Street, and al-Misrara area, sprayed many with wastewater mixed with chemicals, in addition to assaulting many of them.

The soldiers also abducted four young men, before moving them to surveillance rooms in Bab al-Amoud, where they frequently assaulted them.

It is worth mentioning that the Israeli escalation started on the first day of the holy Muslim month of Ramadan, especially in the courtyard of Al-Aqsa Mosque, Bab al-‘Amoud, and several neighborhoods in the Old City, before the army was forced to remove its barriers in areas leading to Al-Aqsa, a week ago.

However, even after the removal of the barricades, the soldiers continued to attack the Palestinians to prevent them from gathering and suiting in Bab al-‘Amoud, in addition to other nearby areas.

The Israeli violations led to dozens of injuries, including those who were assaulted by illegal colonialist settlers, in addition to the abduction and detention of scores of Palestinians.