Israeli Soldiers Attack And Abduct A Palestinian Woman In Jerusalem 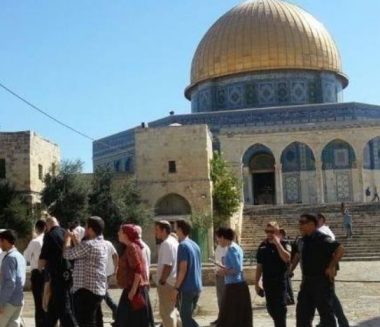 Israeli soldiers attacked and abducted, on Monday evening, a Palestinian woman from the courtyards of the Al-Aqsa Mosque, in occupied Jerusalem.

Eyewitnesses said the soldiers assaulted the woman, and abducted her, before moving her to a nearby police station.

Firas ad-Dibis, the head of the Public Relations Department at the Waqf and Islamic Endowment Department, said the soldiers also summoned for interrogation two guards of the Al-Aqsa Mosque, identified as Ahmad Damiri and Ghazi Asaliyya, for trying to stop the assault against the woman.

The incidents took place after the police accompanied dozens of colonialist settlers into the courtyards of the holy site, and conducted provocative tours.

In related news, dozens of soldiers invaded Wadi Qaddoum neighborhood, in Silwan town, south of the Al-Aqsa Mosque, after closing its main street, and conducted extensive searches of homes.