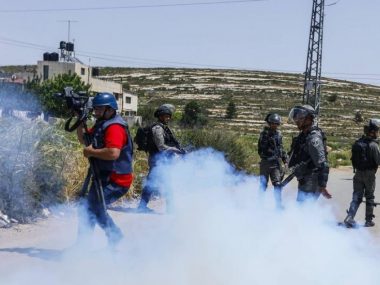 Israeli soldiers attacked, Tuesday, dozens of nonviolent protesters and journalists, during a protest held by families of political prisoners near the northern entrance of al-Biereh city, in central West Bank, wounding many of them.

The soldiers deliberately attacked journalists documenting the nonviolent procession and fired many gas bombs and concussion grenades at them.

The army also resorted to the excessive use of force against the nonviolent protesters, and fired gas bombs at them, causing many to suffer the effects of teargas inhalation, and wounding two who were directly shot with gas bombs, including one who was hit in the head.

The nonviolent procession was held by more than 200 mothers or wives of political prisoners, in addition to many residents, including political leaders, who marched carrying Palestinian flags and pictures of imprisoned loved ones.

After the soldiers assaulted the nonviolent protesters, and forced them to disperse, several youngsters started hurling stones at the army, while the soldiers fired more gas bombs and concussion grenades at them, and at local journalists.