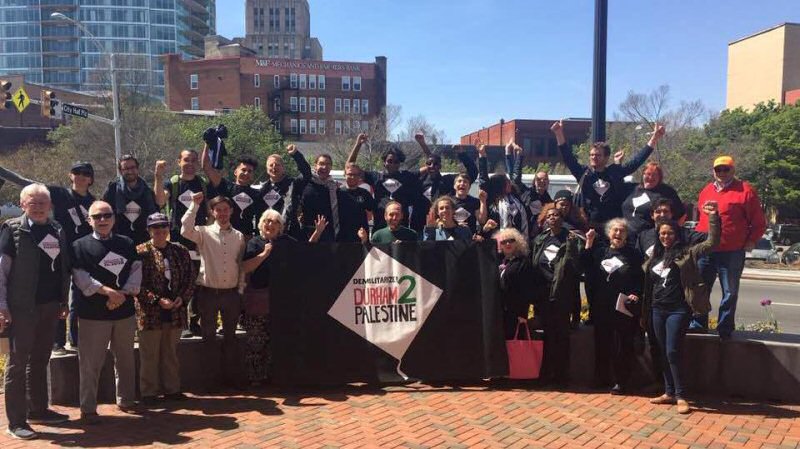 DURHAM, NC: Late Monday evening, Durham voted unanimously to become the first city in the U.S. to prohibit police exchanges with Israel, after broad community pressure and popular petition by the Demilitarize! Durham2Palestine coalition, an affiliate of the Deadly Exchange Campaign. The policy, which states that, “the Council opposes international exchanges with any country in which Durham officers receive military-style training,” was voted into official policy of the City of Durham during heated debate at City Council.

In a time of increasing concern about policing and police violence, in particular for communities of color, the city of Durham is leading the way in declaring that safety for all means de-militarizing the police force. From traffic stops that target Black drivers, to checkpoints that target immigrant communities, to police murders of Black, Brown, and disabled people, police forces cause daily harm. Police exchanges between the U.S. and Israel explicitly offer U.S. police officers exposure to methods used against Palestinians that numerous international human rights groups say are discriminatory and lead to human rights violations.

“This is an important step towards divesting from militarization and over-policing, and investing in Black and Brown futures,” stated Laila Nur of Durham For All, one of the coalition members. “I am proud to see Durham leading the way; it’s a huge victory towards a vision of safety and sanctuary for all.”

“The Demilitarize Durham2Palestine Coalition is leading the way as a model of how to build communities that value safety for all people. We are thrilled by this first win of the Deadly Exchange campaign, which is especially meaningful as a response to the ongoing targeting of unarmed Palestinians in Gaza and the call from the Boycott, Divestment and Sanction Movement in response to end U.S./Israel police exchanges,” stated Jewish Voice for Peace Executive Director Rebecca Vilkomerson.

Ending police training exchanges between U.S. law enforcement and Israeli security forces, according to the Deadly Exchange campaign, works towards reducing state violence and discrimination. Since the early 2000s, thousands of U.S. police officers, sheriffs, border patrol agents, ICE officers and FBI agents have trained with Israeli military and police forces. Through one of these programs, the Anti-Defamation League’s (ADL) National Counter-Terrorism Seminar (NCTS), U.S. law enforcement agents visit checkpoints and prisons and meet with Israeli officials at other sites of violence and racial profiling, such as Hebron’s settler-controlled areas and Ben Gurion airport.

Lee Mortimer, a member of the Coalition for Peace with Justice, pointed out that, “There are many countries with human rights abuses; Israel is the only one on which the US government lavishes monetary and financial support.”

“This policy is a powerful affirmation of the solidarity many of us feel with Palestinians in Gaza, who continue to march for land and freedom despite IDF massacres, and it is an important step towards a demilitarized Durham, where all people can be truly safe and free,” added Noah Rubin-Blose of Jewish Voice for Peace – Triangle NC, another coalition member.

Ajamu Amiri Dillahunt, of coalition member Black Youth Project 100-Durham Chapter, said, “BYP100 is part of this campaign because we are against expropriation and genocidal occupations. We recognize how our struggles correspond as we fight against police violence in the U.S. and unarmed Palestinians fight against violence from the IDF.”

In recent decades, the U.S. has witnessed a shift in policing, a post-9/11 trend bringing counter-terrorism logics, technology and tactics into domestic policing and immigration policy. This militarization of the police has led to the increased police violence against  communities of color, intrusive surveillance particularly in Muslim communities, and the violent repression of Indigenous-led movements, compounded with increased police targeting of people of color, including in the city of Durham. Law enforcement exchange programs, under the banner of Israeli counterterrorism expertise, contribute to these deadly trends by encouraging an even deeper application of counterterror and counter-insurgency models into domestic policing, immigration and surveillance policies and practices.

Durham City Councillor Javiera Caballero stated: “I am an immigrant because of military influence and a foreign power […] At some point we need to move away from militarization, period… To the immigrant community: You are loved, and your fight is our fight.”

“In my own experience, having spent my winter break in the West Bank, the tear gas that clouded the vision of my eyes and those of the few hundred protesters around me served as an eye opener to the unjust, militaristic practices the Israel Defense Forces uses against peaceful protesters,” said Ahmad Amireh of Duke Students for Justice in Palestine. “No police department needs any exposure to the IDF’s racist practices, and Durham will be a safer city by committing to ending police exchanges with Israel.”

In order to raise their concerns over possible police exchanges with Israel, the Demilitarize! Durham2Palestine coalition of ten local organizations, including the Jewish Voice for Peace-Triangle, NC chapter, led a petition drive that gathered over 1,200 signatures of Durham residents in opposition to such exchanges with Israel. The coalition was galvanized as Durham’s current Police Chief, Cerelyn Davis, previously organized police exchanges between Atlanta and Israel through the Atlanta Police Leadership Institute International Exchange Program. Moreover, Durham’s past Police Chief Jose Lopez, while in office, participated in the American Defense League’s National Counter-Terrorism Seminar with the Israeli Defense Force in 2008; the ADL lists the Durham Police Department as one of many law enforcement agencies trained through NCTS.

Pastor Mark Davidson of the Church of Reconciliation and Miriam Thompson, co-conveners of the Abrahamic Initiative on the Middle East, said in a statement: “As faith leaders and human rights advocates, AIME is honored to support the D2P campaign and gratified at the (recommended) vote of the Durham City Council that establishes and secures a just and peaceful environment and a police-community partnership, by prohibiting foreign military training of Durham police, especially from countries that practice human rights violations.”

A letter of support to the City of Durham by an interfaith movement of rabbis, Christian clergy and imams, sponsored by American Muslims for Palestine (AMP), Friends of Sabeel – North America (FOSNA) and JVP, which was read on Monday evening, states: “As clergy, we wholeheartedly endorse the amazing work of Demilitarize! Durham2Palestine to halt any future police exchange partnerships between the Durham Police Department and the Israel Defense Forces (IDF)… We believe it is our religious and moral duty to champion human rights, and we respect this courageous statement that seeks to protect all communities from harm—in Durham, Israel/Palestine, and around the world.”

Jewish Voice for Peace is a national, grassroots organization inspired by Jewish tradition to work for a just and lasting peace according to principles of human rights, equality and international law for all the people of Israel and Palestine. JVP has over 200,000 online supporters, over 70 chapters, a youth wing, a Rabbinic Council, an Artist Council, an Academic Advisory Council, and an Advisory Board made up of leading U.S. intellectuals and artists.

Demilitarize! Durham2Palestine coalition is made up of ten local organizations in Durham: AIME (Abrahamic Initiative on the Middle East), Black Youth Project 100 – Durham Chapter, Durham for All, Inside Outside Alliance, Jewish Voice for Peace – Triangle Chapter, Muslim American Public Affairs Council, Muslims for Social Justice, SpiritHouse, Students for Justice in Palestine – Duke, and Students for Justice in Palestine – UNC-CH.