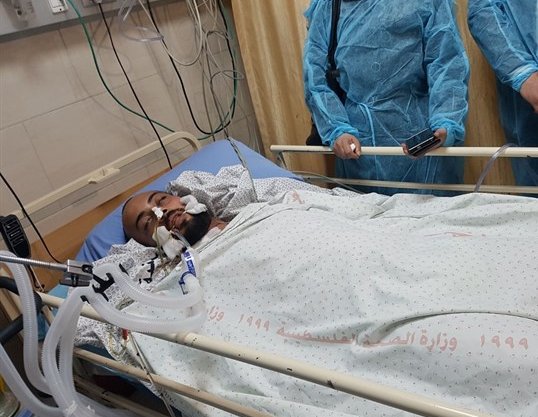 A Palestinian journalist from Gaza, one of the over 2,000 Palestinians wounded in the past 18 days by Israeli forces, arrived in a coma to Ramallah General Hospital Monday, after repeated delays of his transfer by Israeli authorities and the denial of treatment by Israeli hospitals.

Ahmad Abu Hussein, a photojournalist from Gaza, was shot on Friday April 13th by Israeli snipers stationed at the border between Gaza and Israel. He was hit with an exploding bullet, a banned type of live fire that exlodes on impact, causing severe internal injuries.

The head of the Palestinian Journalists’ Syndicate, Nassar Abu Bakr, criticized the delay in the transfer of the patient, telling reporters from the Ma’an News Agency, “The Israeli authorities committed two crimes against Abu Hussein, one when injuring him with an explosive bullet in the head and another when delaying his transfer from Gaza hospitals to Ramallah, as if the occupation insists on killing him.”

Abu Bakr said that specialized Israeli hospitals were better equipped to treat the severely wounded journalist, but none would accept to have him transferred. So he was sent to Ramallah General Hospital in the West Bank. He added that only through ‘strenuous efforts’ by a number of Palestinian officials was this transfer made possible.

Dozens of journalists gathered in front of Ramallah General Hospital in solidarity with their wounded colleague, when he arrived at the hospital early Monday morning.

At least ten Palestinian journalists have been among those targeted by Israeli forces in their attacks on non-violent protests in Gaza over the past three weeks. On April 6th alone, six journalists were shot, and one was killed – 30-year-old Yasser Murtaja, who was wearing a clearly labeled PRESS flak jacket.