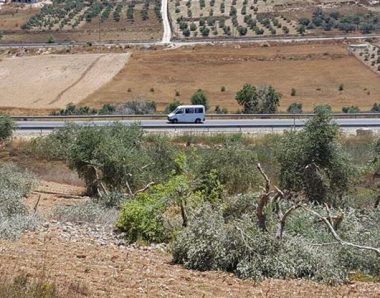 Several Israeli colonizers, living in Yitzhar illegal colony which was built on Palestinian lands, south of the northern West Bank city of Nablus, wrote racist graffiti and cuts many olive and almond trees in Orif village.

He stated that the colonizers cut at least 10 olive trees, 10 almond trees and three grapevines.

Shehada stated that the villagers, their homes and lands have been subject to escalating assaults and violations, especially since the village is just 200 meters away from the illegal colony.

On Wednesday at dawn, dozens of Israeli soldiers invaded the towns of Ethna, Deir Samit, Sa’ir and Bani Neim, in the southern West Bank governorate of Hebron, searched many homes and summoned two Palestinians for interrogation.

In related news, the soldiers abducted a Palestinian guard of the Al-Aqsa Mosque in occupied Jerusalem and summoned four others for interrogation.

Furthermore, the soldiers fired at least two artillery shells into Palestinian lands, close to the border fence east of Khuza’a town, east of Khan Younis, in the southern part of the Gaza Strip, wounding five Palestinians, including one who suffered a serious injury.