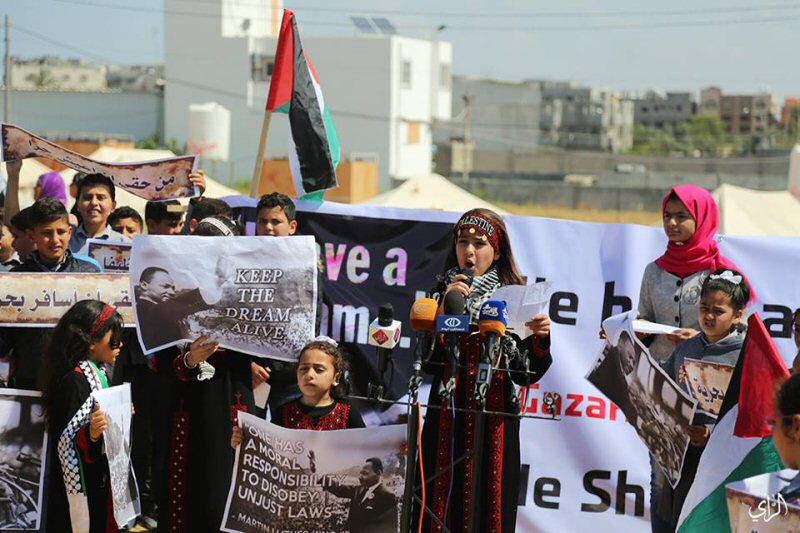 A group of Palestinian children gathered on Monday, near the eastern border area of the Gaza city, to celebrate the 50th anniversary commemorating the life of American icon activist Martin Luther King.

In their speech, the children paid tribute to Martin’s non-violent struggle and peaceful resistance in fighting racism, pointing out the similarity between King’s ideas and “The Great March of Return”, which set out to call for Palestinian refugees’ right of return adopted by UN resolution 194.

According to Al Ray, the gathering included a speech in three languages Arabic, English and French, and was performed by a boy and two young girls. “What Martin Luther King advocated is consistent with our culture and principles…. What is striking in King’s struggle is his insistence on peaceful struggle and maximizing the status of love in defending just causes,” they said.

“We, as Palestinian children, today peacefully seek our fundamental rights, foremost of which is to live on our land in peace and to return to our homes, and urgently our right to freedom of movement and travel, our right to play like the rest of the world’s children, our right to have clean water and healthy food,” the children added.

The children also called upon the world, particularly the United Nations and free people everywhere, “to stand by Palestinians and support them” until they obtain all of their rights, foremost of which is the lifting of the unjust siege on Gaza, and the right to education and health.

Martin Luther King Jr. (January 15, 1929 – April 4, 1968) was an American Baptist minister and activist who became the most visible spokesperson and leader in the civil rights movement from 1954 until his death in 1968. He is best known for advancing civil rights through nonviolence and civil disobedience tactics his Christian beliefs and the nonviolent activism of Mahatma Gandhi helped inspire.

Martin Luther King was shot at the Lorraine Motel in Memphis, Tennessee, on April 4, 1968 was rushed to St. Joseph’s Hospital, where he was pronounced dead.

For the third week, Palestinians have staged protests along the Gaza Strip’s eastern borders despite Israeli occupation’s warning that it will not change its open-fire policy.

The Great March of Return, launched on 30 March, saw tens of thousands of Palestinians demonstrating near the border for their right of return as enshrined in UN Resolution .