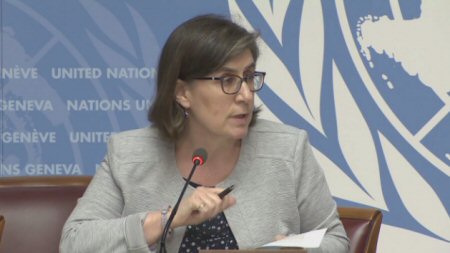 The statement was released on Friday, hours before nine Palestinians were killed along the border — including a journalist and two minors — bringing the death toll to 29 since “The Great March of Return” began on March 30.

“Given the deplorable killing of 16 people and the injuring of reportedly more than 1,000 others during protests in Gaza, mostly on 30 March, we are gravely concerned that further violence could occur during demonstrations today and in the coming weeks,” Throssell said.
“Given the large number of injuries and deaths, the ominous statements made by Israeli authorities in the days leading up to the protest, as well as indications that the individuals killed or wounded were unarmed or did not pose a serious threat to well-protected security forces – and in some cases were actually running away from the fence – there are strong indications that security forces used excessive force.”

The statement went on to note, according to Ma’an News Agency, that Israeli forces are required by international human rights law “to respect the rights to peaceful assembly and expression and to use, to the extent possible, non-violent means to discharge their duties.”

“In accordance with international human rights law, firearms may be used only in cases of extreme necessity, as a last resort, and in response to an imminent threat of death or risk of serious injury.”
Throssell highlighted that even if protesters “attempt to approach or cross the green-line fence,” it “does not amount to a threat to life or serious injury that would justify the use of live ammunition.”

“We remind Israel of its obligations to ensure that excessive force is not employed against protestors and that in the context of a military occupation, as is the case in Gaza, the unjustified and unlawful recourse to firearms by law enforcement resulting in death may amount to a wilful killing, a grave breach of the Fourth Geneva Convention,” Throssell said.

“We echo the call by the UN Secretary-General for an independent and transparent investigation into these incidents, with a view to holding accountable those responsible.”

Following the deadly first day of protests in Gaza last week, the UN and European Union (EU) called for an investigation into the Israeli army’s violent suppression of protests.

Israel’s Minister of Defense Avigdor Lieberman rejected the calls, instead saying “from the standpoint of the [Israeli Defence Force] soldiers, they did what had to be done.”
Lieberman added that he thinks “all of our troops deserve a commendation.”

Israel has repeatedly perpetuated the narrative that the massive demonstrations — which were organized by grassroots organizations and local activists as a nonviolent protest — were organized by the Hamas movement, and that the protests were being used as to “camouflage terror.”

The UN call for the investigation into the killings came after the US blocked a UN Security Council (UNSC) statement condemning Israel’s use of force against civilian protesters at the Gaza border, which rights groups have deemed criminal and illegal.

Israeli forces have long been criticized for their use of excessive force against Palestinians, and what rights groups have termed their policy of “extrajudicial execution” in instances where Palestinians who did not pose a direct threat to the lives of soldiers could have been detained or subdued in a non-lethal manner.