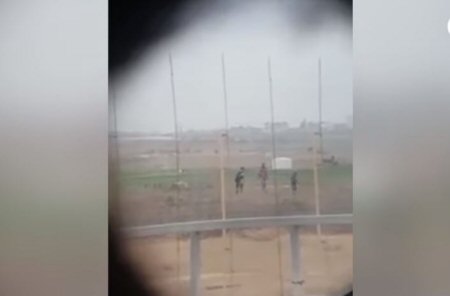 Education Minister Naftali Bennett came “Anyone who was ever on the battlefield knows that to sit in Tel Aviv or studios and judge IDF soldiers according to their comments, when they are busy defending our borders, is not something serious.”

Public Security Minister Gilad Erdan said: “It would have been better if the [soldiers’] happy reactions were not circulated, but to judge them and conclude something there was wrong, is crazy.”

Ofir Akunis, the science, technology and space minister, said: “He[the boy] is not an innocent civilian who is coming to seek peace. I am sure of that.”

MK Oren Hazan twittted: “What is all the fuss about? It was noted in advance: anyone who approaches the fence, armed or not, is gonna get it. As it should be!”

He reiterated that he was proud of the soldiers defending Israel this way, and that he hopes the video sends “a clearer message to the other side.”

Arab MK Jamal Zahalka of the Joint List said: “Israeli snipers killed unarmed Palestinian protesters in cold blood who were participating in a non-violent protest. It is no wonder soldiers act this way when ministers, MKs, the media and the public opinion join the celebration and cheer for the mass killing of Palestinians.”