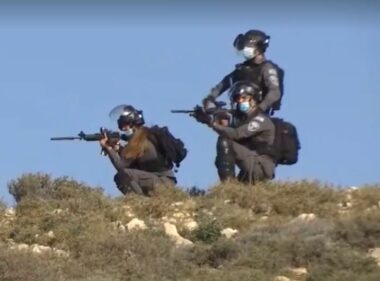 Media sources in Nablus said hundreds of residents marched from the center of Beit Dajan, on Friday afternoon, and headed towards large swaths of their lands which Israel intends to illegal annex for the construction and expansion of its illegal colonies.

They added that the soldiers resorted to the excessive use of force against them, and fired many gas bombs and concussion grenades, causing scores of residents to suffer the effects of teargas inhalation.

The Israeli attack took place in the area where weekly protests have been held over the last two months, after Israel decided to illegally annex the lands to build its segregated illegal colony.

In addition, the soldiers violently attacked dozens of protesters, holding the weekly nonviolent protest in Deir Jarir village, northeast of Ramallah, causing scores to suffer the effects of teargas inhalation.

The weekly protests in Deir Jarir started months ago after Israel announced a new plan to build an illegal colony on the villagers’ lands.

Ayman Allawi, the mayor of Deir Jarir, told the WAFA Palestinian News Agency that the soldiers fired a barrage of rubber-coated steel bullets, concussion grenades, and gas bombs at the nonviolent protesters, causing dozens to suffer the effects of teargas inhalation.

Approximately two weeks ago, the colonists set installed a tent on the Palestinian lands, and started working on establishing a new colonialist outpost, including infrastructure.

It is worth mentioning that Deir Jarir has also been subject to escalating Israeli invasions by the soldiers, and attacks carried out by the illegal colonists targeting the local, their homes, and lands.