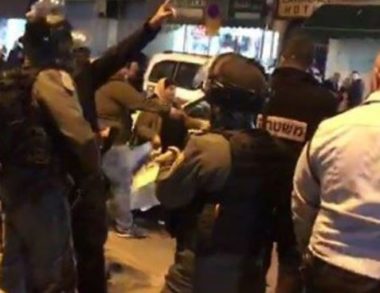 Israeli soldiers attacked, Sunday, dozens of Palestinians nonviolently protesting the abduction and imprisonment of the governor of occupied Jerusalem, Adnan Gheith, causing many injuries, and abducted one.

The soldiers and the police fired dozens of concussion grenades at the protesters, and assaulted many of them with clubs and batons, causing many to suffer various cuts and bruises.

The soldiers also attacked and injured another Palestinian, identified as Jawad Siyam, before abducting him.

The Palestinians were nonviolently marching against the ongoing and escalating Israeli violations in the occupied Palestinian capital, and called for the immediate release of the governor, before the soldiers resorted to the excessive use of force against them.

The protesters affirmed that Israel’s violations, including the abduction of the governor, are part of Israel’s attempt to enforce its illegal occupation and control of the city, and added that the Palestinians will remain steadfast and will continue their struggle for liberation and independence.

They called on the international community to stand with the Palestinians, facing some of the most dangerous and racist violations by Israel, which denies their basic rights in their homeland.

It is worth mentioning that an Israeli court remanded the governor until the next hearing on Thursday.

His lawyer, Rami Othman, said the Central Court in occupied Jerusalem, will be looking, on Monday morning, into an appeal against the governor’s remand.