Israel Is Building A New Illegal Colony In Nablus 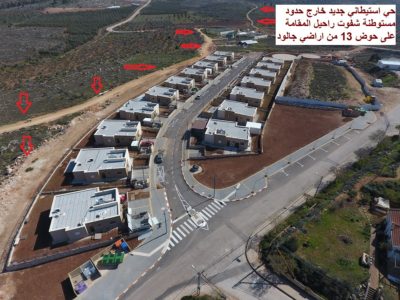 The Israeli occupation authorities are ongoing with the destruction and bulldozing of private Palestinian lands in Ein Jaloud village, south of the northern West Bank city of Nablus, as part of growing construction of an illegal colony.

Ghassan Daghlas, a Palestinian Authority official who monitors Israel’s illegal colonialist activities in northern West Bank, told WAFA Palestinian News Agency that the army is ongoing with preparation work, including a new road, a concrete water reservoir and new units on Palestinian lands on the hilltops of Jaloud.

He added that the colonialist settlers have already installed a large tent, and several wooden rooms in that area.

Daghlas also stated that the army, and the colonists, are ongoing with preparation work to expand the illegal colonies in five areas in Nablus, especially the expansion of Shvut Rachel and Amichai colonies.

“This is happening while Israel is ongoing with expansion work in Ahiya, Esh Kadesh and Kida illegal colonies, on Palestinian lands,” he added, “The constructions are even taking place on build more ‘neighborhoods’ outside of these colonies, by stealing more lands from the Palestinians.”

He also said that the colonies and outposts which were illegally built on the southern and eastern areas of Jaloud, have been witnessing a serious and dangerous escalation of illegal colonialist constructions, as Israel plans to create a colonialist bloc in an area of more than eight square/kilometers of lands owned by Jaloud villagers, in Area C of the occupied West Bank.

All of Israel’s colonies and outposts in the West Bank, including in and around occupied East Jerusalem, are illegal under International Law, the Fourth Geneva Convention, to which Israel is a signatory and a constant violator, in addition to various international treaties and agreements.