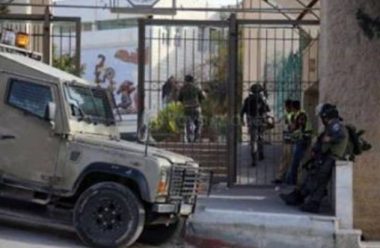 Israeli soldiers attacked, Thursday, dozens of Palestinian students, protesting near the campus of Al-Quds University, in Abu Dis town, southeast of occupied East Jerusalem, and wounded six with rubber-coated steel bullets, in addition to causing eighteen others to suffer the severe effects of teargas inhalation.

The soldiers invaded the School Street area, near the Al-Quds University campus, clashed with many students, and fired dozens or rubber-coated steel bullets, wounding six students, in addition to firing many gas bombs, causing eighteen others to suffer the severe effects of teargas inhalation.

The Palestinian Red Crescent confirmed its medics rushed to the area, and provided the needed treatment to all wounded students, without the need to hospitalize any of them.

In addition, several Israeli army jeeps invaded Fahma village, south of the northern West Bank city of Jenin, broke into the home of Ahmad Shafiq Sa’abna, and interrogated him before illegally confiscating his car.

The soldiers also invaded Beit Qad and Deir Abu Da’if villages, northeast of Jenin, and drove through their neighborhoods and alleys in a provocative manager before withdrawing.

Earlier Thursday, the soldiers abducted a young Palestinians man, after stopping him at a sudden military roadblock near Jenin, and violently searched the home of a political prisoner in Jenin refugee camp, while interrogating the family.

The soldiers also abducted one Palestinian in Hebron, and three others in Bethlehem, in the occupied West Bank.