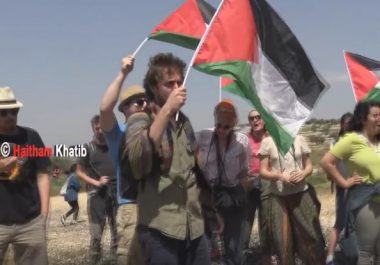 Israeli soldiers attacked, Friday, the weekly nonviolent procession held by many Palestinian, Israeli and international peace activists in Bil’in village, west of the central West Bank city of Ramallah, causing many to suffer the effects of teargas inhalation.

The nonviolent protesters marched from the village heading towards their lands, isolated behind the illegal Annexation Wall, before the soldiers started firing gas bombs, concussion grenades and rubber-coated steel bullets.

The soldiers, stationed on military towers, also filmed the protesters, to profile them, a move used to abduct and imprison the nonviolent protesters.

The protesters marched carrying Palestinian flags, and chanting for national unity, steadfastness, the release of all detainees, and the Right of Return of all refugees, and called for steadfastness until liberation and independence.