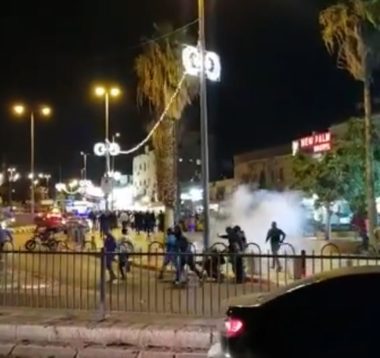 Israeli soldiers attacked, on Wednesday evening, Palestinian Muslim worshipers in the al-Asbat and Bab al-‘Amoud areas, in occupied East Jerusalem, while leaving the Al-Aqsa Mosque, and abducted three of them.

Eyewitnesses said the soldiers, and police officers, assaulted many worshipers in Bab al-Asbat and Bab al-‘Amoud, just as they were leaving the Al-Aqsa Mosque, and abducted three of them.

The soldiers also attacked many Palestinians, sitting in the Bab al-‘Amoud square, especially on its famous stone stairs, and hurled concussion grenades at them, before forcing everybody to leave, without any justification.

The soldiers also chased the Palestinians in al-Misrara area and Sultan Suleiman Street, and hurled concussion grenades at them.

Eyewitnesses said the attacks took place just as hundreds of Palestinians, including women, children and the elderly, were leaving Al-Aqsa through Bab al-‘Amoud, and continued to hurl concussion grenades at them.