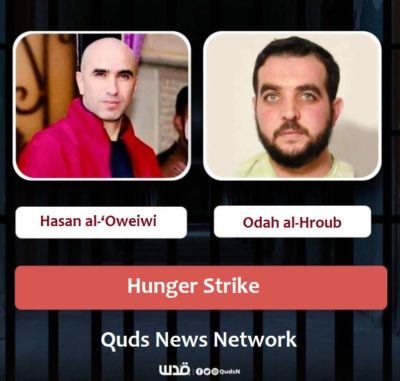 The Palestinian Prisoners’ Society (PPS) has reported that two detainees, held by Israel, are ongoing with the hunger strike they started 37th days ago, demanding an end to their continued arbitrary Administrative Detention, without charges of trial.

The PPS said the two detainees, identified as Odah al-Hroub, 32, and Hasan al-‘Oweiwi, 35, from the southern West Bank governorate of Hebron, are demanding an end to their illegal Administrative Detention.

It added that the two detainees are facing deteriorating health conditions, but the Prison Authority keeps transferring them from one prison to another, including just a day ago, to prevent them from resting and pressure them into ending their strikes without achieving their demands.