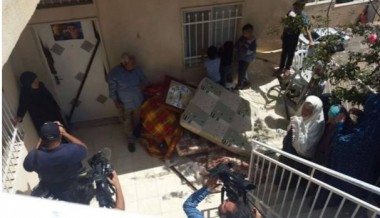 Israeli soldiers closed, Monday, the family home of a Palestinian detainee from Sur Baher town, south of occupied East Jerusalem. The detainee, along with four others, stand accused of causing the death of a settler by allegedly throwing stones at a vehicle that then crashed.

The Wadi Hilweh Information Center in Silwan (Silwanic) in Jerusalem said the soldiers placed iron plates on all windows and doors, and welded them shut, and also blockaded the road leading to the property. The home belongs to the family of detainee Abed Dweiyat, 19.

Dweiyat, and four other Palestinians, are currently held by Israel under the allegation of “causing the death of an Israeli settler” in August of last year.

The Israeli army claims that the five Palestinians hurled stones towards a setter’s car, causing the car to crash. The settler died in the crash.

Israel also revoked their families’ residencies in Jerusalem, in addition to cancelling their national and health benefits, and issued orders for the demolition or closure of their homes.

Dweiyat’s mother said she left her home to attend her son’s trial, and just minutes later, her neighbors called her informing her that the soldiers invaded the neighborhood and started welding her home’s windows and doors shut.

The property is 120 square/meter and was built dozens of years ago; the family living in the property is the mother, her son and three daughters.

“My home is not, and will never be, more important than Abed,” she said, “But they welded our home shut even before the court made its ruling.”

Dweiyat, along with Ali Sabra Issa, 18, Mohammad Salah Abu Kaff, 18, Waleed Firas al-Atrash, 19, and Mohammad Jihad at-Taweel, 17, were taken prisoner in August of last year, and by the end of December, the Israeli Minister of Interior decided to revoke the ID cards and residencies of Abu Kaff, al-Atrash and at-Taweel.

In early February this year, the Israeli army decided to shut the homes, and confiscate them, and in mid-march, the Israeli National Insurance Institute decided to revoke all health benefits.

The families filed appeals with the Israeli High Court, but it refused to revoke the close and confiscation orders of the Dweiyat family home.

The court approved the appeals filed by Abu Kaf, at-Taweel and al-Atrash families, and spared their homes.

It is ruling, the court said that the four Palestinians hurled stones at the settler’s car, but “Dweiyat was the one who stood in the middle of the street, and hurled a stone at the front shield of the vehicle, from a close distance, causing the death of the settler after his car crashed.”

The families denounced the Israeli decision to punish them,
including revoking their ID cards, cutting their insurance benefits and closure of the Dweiyat home, especially since the case is still open, and the court is scheduled to hear witness testimonies.

They added that, last month, their sons were beaten up in the Central Court, by soldiers of the Nahshon Battalion and court guards, causing Mohammad Taweel to suffer broken teeth. Mohammad, and the three other defendants, also suffered various cuts and bruises.

Unlike Jewish Israelis, Palestinians born in Jerusalem are no
t granted citizenship and instead are given residencies.

In a report published by Israeli daily Haaretz in December of 2014, only 12 percent of the Arabs (Palestinians) in Jerusalem actually have Israeli citizenship.

The information that Haaretz obtained from the Interior Ministry revealed that out of the 815.000 inhabitants, nearly 300
.000 are Palestinian, and only 12% of them are actually citizens of Israel.

Although born in Jerusalem, and most come from families that are historically from the city, Palestinians, as well as all non-Jewish foreigners who move to the country, are granted permanent residencies, while Jews who immigrate to Israel can easily obtain Israeli citizenship.

In addition, the Israeli Information Center for Human Rights in the Occupied Territories (B’Tselem) reported that, since 1967, Israel revoked the residency rights to more than 14.000 Palestinian, in most cases without a warning.

The Center said that, although some of these cases are related to persons who carried out attacks against Israel, most residency revocations were made because the person/s moved for a certain period to the West Bank, or traveled to work or study abroad.