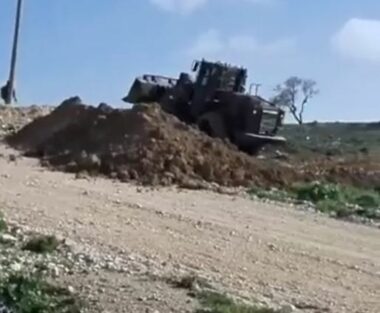 Ghassan Daghlas, a Palestinian official in charge of monitoring Israel’s illegal colonialist activities in northern West Bank, said the Israeli bulldozers uprooting the lands in the Abu Miladi area, north of the village.

He stated that the lands are near the illegal Yitzhar colony, which was installed on expropriated Palestinian lands, and added that the attack is part of Israel’s attempts to expand the colony.

In related news, the soldiers invaded the village of Kardala, in the northern Jordan Valley of the occupied West Bank, and confiscated equipment, including heavy machinery, while working on rehabilitating a road.