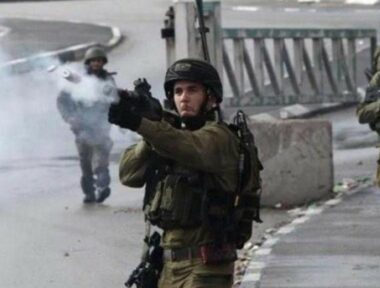 On Tuesday, Israeli soldiers chased many Palestinian workers near the illegal Annexation Wall west of Jenin, in the northern part of the occupied West Bank.

Media sources said the soldiers invaded the towns and villages of Faqqu’a, Aneen, Taybeh, Toura, al-Arqa, and Zabbouba, all near the Annexation Wall, and fired many gas bombs and concussion grenades at them.

The soldiers stopped and searched dozens of Palestinian cars and interrogated many residents while inspecting their ID cards.

On Monday dawn, the soldiers attacked many Palestinian workers close to the Annexation Wall gates near Aneen town and Tayba villages, west, and northwest of Jenin.