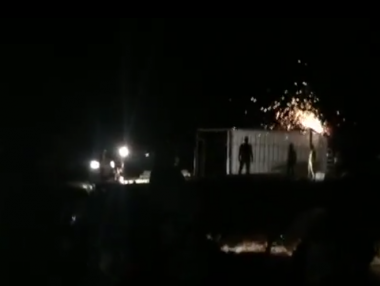 Hasan Brejiyya, the representative of the Popular Committee against the Annexation Wall and Colonies in Bethlehem, said the dozens of soldiers invaded the village, and confiscated the mobile rooms.

Locals tried to stop the soldiers and prevent them from confiscating the mobile rooms of the make-shift school, but the soldiers assaulted them, and fired several live rounds.

Brejiyya added that the invasion came just a few days after the army stormed the village, and ordered the school shut.

Sami Marwa, the director of the Education Ministry in Bethlehem, said the school was established to provide education to 64 children, from grade one to four, and is in the center of a residential community.

He added that the school’s teachers and administration started working there last Sunday, and the school year was supposed to start Wednesday.

Marwa further stated that the ministry is currently trying to come up with alternatives to ensure the resumption of the educational process for the local children.

The village lacks basic infrastructure and services, and is under full Israeli military and civil control.