Israeli Soldiers Injure Many Palestinians Near Jerusalem, Invade Mosque And Home In Hebron 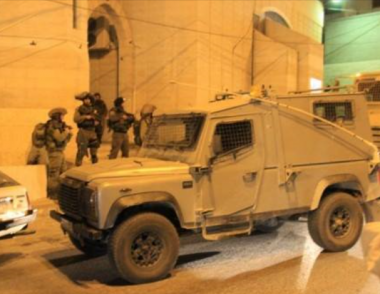 Israeli soldiers invaded, on Tuesday evening, the town of al-’Ezariyya, southeast of occupied East Jerusalem, attacked a family of a detainee, and caused many Palestinians to suffer the severe effects of teargas inhalation during ensuing clashes. The soldiers also invaded a home in Hebron city, and a mosque in Yatta nearby town.

The WAFA Palestinian News Agency has reported that the soldiers invaded the home of detainee Hasan Abu Reesh, in al-‘Ezariyya town, and ransacked it causing excessive damage, in addition to attacking his family.

The invasion led to clashes between the soldiers and many local youngsters, who hurled stones at the military jeeps, while the soldiers fired gas bombs and concussion grenades.

Medical sources said many Palestinians suffered the severe effects of teargas inhalation, and received the needed treatment by local medics.

In Hebron, in the southern part of the West Bank, the soldiers invaded a home, owned by Abdul-Moghni Abu Turki, and violently searched it.

The soldiers also invaded a mosque in the center of Yatta town, south of Hebron, and thoroughly searched it.