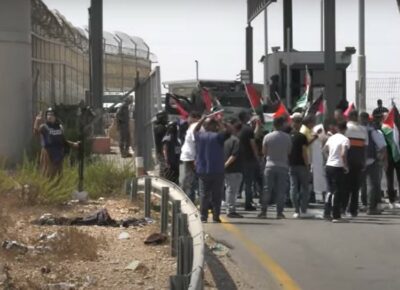 On Friday, Israeli soldiers and illegal colonizers attacked a nonviolent procession in Nabi Samuel village, northwest of the occupied capital, Jerusalem, in the West Bank, and abducted four Palestinians.

The residents marched carrying Palestinian flags and calling for ending the Israeli siege on the village of 300 inhabitants.

The procession was held before the permanent Israeli military roadblock before the soldiers assaulted them and used loudspeakers threatening to use more force if the nonviolent protesters did not leave.

Illegal Israeli colonizers, led by the leader of the fanatic right-wing Otzma Yehudit party, Itamar Ben-Gvir, also attacked the nonviolent protests in front of the soldiers. It is worth mentioning that Ben-Gvir led a large group of illegal colonies in their provocative march and tried to invade the village before the Palestinians intercepted their attack.

The Palestinians in Nabi Samuel started holding weekly procession two months earlier, protesting the illegal Israeli policies, especially the siege and severe restrictions on them, affecting their daily lives and denying them the Freedom of Movement, in addition to barring them from entering their lands.

The village has one mosque that has been subject to frequent attacks, including when it was burnt, surrounded by barbed wires and surveillance cameras, and the destruction of its loudspeakers.

The Israeli soldiers and the colonizers also closed the second floor of the mosque and stopped work on its third floor, as Israel and its colonizers are trying to occupy it and turn it into an archaeological site and a National Garden for the Israelis.

In related news, Israeli colonizers installed two tents on Palestinian lands outside the Al-Auja village, near Jericho in the northeastern West Bank.

The colonizers also harassed many Palestinians touring the area and forced them to leave.