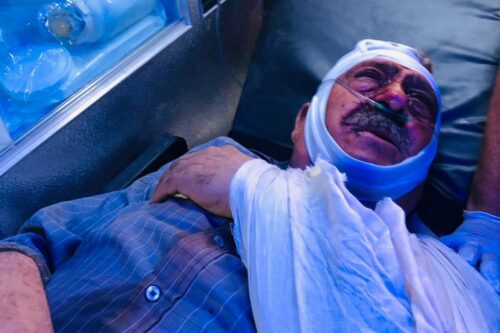 On Thursday evening, Israeli soldiers and illegal colonizers injured six Palestinians, including one who was shot and damaged five cars, in Sinjil town, north of the central West Bank city of Ramallah.

WAFA added that the colonizers and Israeli soldiers fired live rounds at the Palestinians, shooting one in the arm.

The colonizers also assaulted many residents, causing fractures and bruises to five Palestinians, including two elders.

The three other wounded Palestinians are the Mayor of Sinjil Mo’taz Tawafsha and two members of the Town Council. The Palestinian Red Crescent Society (PRCS) said the colonizers attacked its medics and ambulances while trying to render the needed aid to the wounded Palestinians and added that the soldiers stopped the ambulance and refused to allow it to reach the area of the injured Palestinians, forcing the medics to carry their medical supplies on foot.

The soldiers also fired many gas bombs at the Palestinians, leading to protests near the town’s main entrance, before firing live rounds, rubber-coated steel bullets, gas bombs, and concussion grenades.