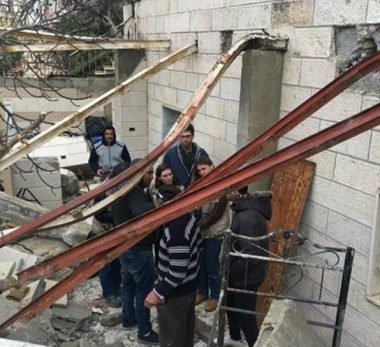 Israeli soldiers demolished, Wednesday, a Palestinian home in Beit Hanina neighborhood, north of occupied East Jerusalem, under the pretext of being built without a permit.

The demolished property is owned by members of Haddad family, who said that they repeatedly, and for several years, tried to obtain permits from the city council, especially when they needed two additional rooms to accommodate them, but the city kept rejecting their applications.

The added that the soldiers detained them in one room, and started demolishing several sections of the house, which was rendered unsafe.

The soldiers also cut and uprooted several trees around the property.

In related news, the soldiers invaded the al-‘Isawiya town, in Jerusalem, and posted demolition orders on walls of several commercial structures.